The phrase "begging the question", or "petitio principii" in Latin, refers to the "question" in a formal debate—that is, the issue being debated. In such a debate, one side may ask the other side to concede certain points in order to speed up the proceedings. To "beg" the question is to ask that the very point at issue be conceded, which is of course illegitimate.

Note: A "misrule of thumb" is a misleading "rule of thumb". I use the term to describe an argument that commits the very fallacy it is intended to show fallacious, as the above argument itself begs the question.

To cast abortion as a solely private moral question,…is to lose touch with common sense: How human beings treat one another is practically the definition of a public moral matter. Of course, there are many private aspects of human relations, but the question whether one human being should be allowed fatally to harm another is not one of them. Abortion is an inescapably public matter. 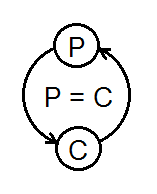 The simplest type of circular argument is an argument with a single premiss that is the same as its conclusion―see the first diagram to the right, where "P" stands for "premiss" and "C" for "conclusion" and the arrows indicate the direction of reasoning. Since P and C are the same proposition, we can also represent this argument with the second diagram, which shows that this is the smallest circle one can reason in. 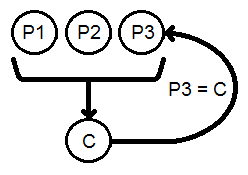 Circularity is more difficult to detect in such complex arguments, but it's usually additionally concealed by the deceptive use of language: the question-begger states the same thing in different words, uses loaded language that presumes the point at issue, and often leaves unstated the premiss that creates the circularity. As a result, simply diagramming an argument as shown here may not reveal the circularity without first untangling the confusing use of language, which is part of what makes begging the question an informal fallacy in logic.

Q: In Patrick J. Hurley's A Concise Introduction to Logic, (10th ed.) a True/False exercise is posed: "Arguments that commit the fallacy of begging the question are normally valid."

Now there certainly are a few things wrong with this question, not the least of which is that Hurley breaks "begging the question" down into three sub-categories, though most sources I've come in contact with cite only "circular reasoning" as the primary example of "begging the question." But he states, "The first, and most common, way of committing this fallacy [of begging the question] is by leaving a possibly false key premise out of the argument while creating the illusion that nothing more is needed to establish the conclusion."

He then gives an example, "Murder is morally wrong. This being the case, it follows that abortion is morally wrong." Here it seems to me that the example is an invalid argument. A key premise is missing, and thus the conclusion does not necessarily follow from the given premise. One might argue that the missing premise is implied, but if one accepts that then it seems the fallacy isn't an issue so much as the strength of the implied premise. After all, a valid argument is one in which if the premises are true, then it is impossible for the conclusion to be false. If there is only one premise and a second premise linking the first to the conclusion is missing, then it would be possible to have true premise(s) and a false conclusion, making the argument invalid. On this basis I answered "False" to the above question.―John Pocock

A: I don't have the tenth edition of Hurley's text; the latest edition I own is the fifth, from 1994. In that edition, as well as earlier ones that I also have, he actually defines "begging the question" as a type of valid argument (p. 153). I think that this is a mistake, but it means that the question you answered "false" would be true by definition. Of course, this raises―not "begs"―the question whether the abortion argument is in fact an example of begging the question; if it's invalid, then it can't be an instance of begging the question.

I think that it's a mistake to define "begging the question" as a type of valid argument because it's unnecessary, since all circular arguments are valid. As I mention in the Exposition above, begging the question is a validating form of argument. This sounds counter-intuitive, especially if you over-estimate the importance of validity. Validity is a virtue of arguments, but a good argument also needs to be sound. Moreover, as explained above, even soundness is not enough: a good argument must actually advance our knowledge or the debate we are in. Begging the question gets us nowhere, as we just end up going around in circles.

In the fifth edition, Hurley gives the same example and apparently considers "all abortions are murders" to be a suppressed premiss of the argument. So, Hurley takes the complete argument to be:

This is certainly a valid argument. Moreover, it doesn't appear to be circular, since the conclusion is not one of the premisses. Why, then, does it beg the question?

It begs the question because the word "murder" is not a morally-neutral word, such as "killing". All murders are killings, but not all killings are murders. A person who kills someone in self-defense, a soldier who kills in battle, or a policeman who kills in the line of duty, is not a murderer. So, the first, unsuppressed premiss is really unnecessary, as the argument is valid without it:

All abortions are murders.
Therefore, abortion is morally wrong.

Or, to spell out what "murder" means:

All abortions are wrongful killings.
Therefore, abortion is morally wrong.

Which is clearly circular and, therefore, valid. In the original argument, the moral wrongness of abortion has been smuggled into the premiss via the morally loaded word "murder". This is how real-life questions are often begged, that is, by using loaded language to conceal the fact that an argument is circular.

Thanks to Christopher Mork for a criticism which led me to revise the Form and add the Etymology and to Paul Freda for a stylistic criticism.

This argument begs the question because it assumes that abortion involves one human being fatally harming another. However, those who argue that abortion is a private matter reject this very premiss. In contrast, they believe that only one human being is involved in abortion—the woman&#151and it is, therefore, her private decision.