Michael Shermer's latest "Skeptic" column in Scientific American―see Source 2, below―is not a review exactly, but is at least based on a new book by Gary Smith, Standard Deviations: Flawed Assumptions, Tortured Data, and Other Ways to Lie with Statistics.

In the column, Shermer discusses "survivor bias", which I think is the same thing as "survivorship bias", though I'm not certain for a reason I'll explain later. This caught my attention because the first story told in Jordan Ellenberg's new book, How Not to be Wrong, is an illustration of survivorship bias. I've mentioned Ellenberg's book here previously―see Resource 2, below― and you can read the first part via the "Look inside" feature at Amazon, if you're interested.

After the first two paragraphs, Shermer's article is a description of the same statistical phenomenon that Ellenberg discusses. I'll leave it to you to read either Shermer's short account or the longer one given by Ellenberg. However, I'm puzzled by Shermer's first two paragraphs where he tells two similar anecdotes, of which I'll quote the first:

When I purchased my latest vehicle, I was astonished to get the license plate 6NWL485. What are the chances that I would get that particular configuration? Before I received it, the odds were one in 175,760,000. (The number of letters in the alphabet to the power of the number of letters on the plate times the number of digits from 1 to 10 to the power of the number of digits on the plate: 263 × 104.) After the fact, however, the probability is one. This is what Pomona College economist Gary Smith calls the “survivor bias,” which he highlights as one of many statistically related cognitive biases in his deeply insightful book Standard Deviations….

By the way, I've fixed two typos that are in the online version of this article―they're not in the print version―namely, the exponents are not shown in superscript, so that it appears that 263 × 104 = 175,760,000. Not even close.

Anyway, here's what puzzles me: both of the little stories that Shermer tells seem to be related to Stephen Law's "lottery fallacy", which I've discussed in the context of the fine-tuning argument and the multiverse theory―see Resource 1, below. In other words, Shermer claims to have been "astonished" at the license plate he received because it was so unlikely that he would receive that particular one. Of course, he wasn't really astonished, because it would have been just as unlikely for him to have received any other plate. I won't recapitulate the whole argument here, which you can read in the Resource and other sources and resources linked to it.

However, what do these anecdotes have to do with survivorship bias? I suppose that one can stretch the notion of "survivors" to include the numbers that come up in a lottery, but the point of survivorship bias is that we either forget, ignore, or sometimes aren't even aware of those that don't survive. In the case of the lottery fallacy, it's because we're acutely aware of just how many other numbers were not picked that we're "astonished" at our luck.

So, these don't seem to me to be related phenomena, but perhaps Smith explains what's going on here in his book more clearly than Shermer does in his short column.

David Marans' Logic Gallery is now available in an actual paper edition―imagine that: a whole book printed on paper! Not only that, but your purchase of the paperback edition will benefit the charitable organization Doctors Without Borders. Of course, there's still a free electronic version available. See the Sources, below, for links to both versions.

The Logic Gallery is a chronological collection of pictures of famous logicians, together with short biographical information, and interesting quotes. In fact, I intend to mine it for quotes about logic and fallacies. 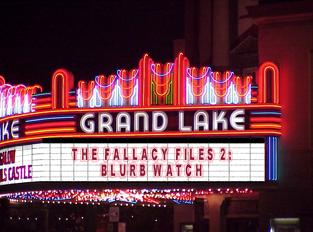 A "STUNNING" and "BRILLIANT" Sequel

Here's something I've never noticed before. A newspaper ad for the new movie Sin City: A Dame to Kill For―a sequel to Sin City, of course―has a total of ten blurbs. The ad seems to be trying to impress the reader with the sheer number of quotes.

Currently, the movie has a "rotten" 43% rating on Rotten Tomatoes' "Tomatometer", an average of many reviews. Metacritic's similar "Metascore" is "44", which is described as "Mixed or Average Reviews", but is only a few points above the "Generally Unfavorable Reviews" category. As a result, there were probably few favorable reviews to quote, so where did the ad writer find so many good blurbs?

Three of them are attributed to Debbie Lynn Elias of the Culver City Observer, but I haven't been able to find a review on the newspaper's website, so I can't check them. However, two are credited to Joel Amos of the Movie Fanatic website: "STUNNING." and "JOSH BROLIN IS BRILLIANT." So, the ad writer found so many quotes partly by drawing multiple ones from the same critic. In fact, there are only six different sources for the ten blurbs.

Surprisingly, if you check Amos' review of the movie―see Source 3, below―you'll find that Amos gave the movie only two stars out of a possible five, corresponding to a 40% rating, which is in line with the Rotten Tomatoes and Metacritic averages. Not only that, but the words "stunning" and "brilliant" are nowhere to be found in the review. So, where did those words come from?

I can only speculate, but Amos did use the word "stunning" in a different article―see Source 2, below―which was a short introduction to a "featurette" on the movie, of which he writes:

The visual style is what made Sin City such a marvel and judging by what we’ve seen so far of the second film, it is even more mesmerizing on the eyes. Watching this behind-the-scenes featurette, viewers get a fantastic look at how Rodriguez and Miller [the directors] achieved this stunning look…

Presumably, this was written prior to Amos actually seeing the entire movie, which must have turned out to be not so stunning. But what about the word "brilliant" as applied to Josh Brolin?

I found an interview with Brolin conducted by Amos two years ago for Men in Black 3, the title of which refers to Brolin's "brilliance"―see Source 1, below. Could this really be what the ad is referring to? If so, this is a stunning and brilliant display of blurbing prowess!