Psychologists Christopher Chabris and Daniel Simons, authors of The Invisible Gorilla, review Rhonda Byrne's new book The Power so that I don't have to. As should be expected, a number of logical fallacies are mentioned, for instance:

"The Secret" is peppered with quotations from a group of about 20 "teachers" or "avatars," many of whom are themselves popular self-help gurus. In "The Power," Byrne also quotes sages like Thoreau, Gandhi and St. Augustine. This ploy, an example of a related logical fallacy called the argument from authority, taps our intuitive beliefs so forcefully that we psychology professors spend time training our introductory students to actively resist it.

In addition, "social proof"―a misleading name, since it's not proof at all―and "illusory correlation" are psychologists' terms for familiar fallacies. I'll leave it as an exercise for the reader to figure out what logicians call these mistakes.

According to the National Bureau of Economic Research (NBER), the recent recession ended over a year ago. However, according to three-quarters of the respondents to a recent poll, we're still in a recession. Who's right? Both, possibly. Here's how the NBER defines "recession":

A recession is a period of falling economic activity spread across the economy, lasting more than a few months, normally visible in real GDP, real income, employment, industrial production, and wholesale-retail sales. The trough marks the end of the declining phase and the start of the rising phase of the business cycle. Economic activity is typically below normal in the early stages of an expansion, and it sometimes remains so well into the expansion.

So, when the NBER declares that the recession ended in June of last year, they mean that was when the economy hit bottom and began to rebound. In contrast, I suspect that most of the folks who took the poll are using the word "recession" in its vague, everyday sense of a bad economic period. So, the trough in June of last year that marks the end of economic decline is, for most people, simply the low point of the ongoing recession. In addition to being vague, "recession" is ambiguous: the NBER and the rest of us mean two different things by it.

Lesbians have their own air force? 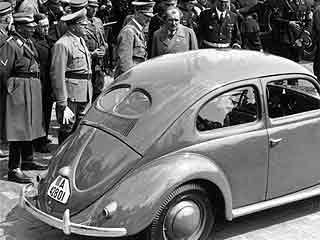 Here's congressional candidate Glen Urquhart on the relationship between religion and government:

Do you know, where does this phrase "separation of church and state" come from? … Actually, that exact phrase was not in Jefferson’s letter to the Danbury Baptists. He was reassuring them that the federal government wouldn’t trample on their religion. The exact phrase "separation of Church and State" came out of Adolf Hitler’s mouth. That’s where it comes from, so next time your liberal friends talk about the separation of church and state, ask them why they’re Nazis.

Urquhart's wrong on the facts, as has been pointed out by law professor Eugene Volokh (see the Source, below, if you're interested), but I'm concerned with the logic―or the lack thereof―of his comment. Urquhart isn't just mentioning in passing some little-known piece of interesting historical trivia, but is making an argument about the concept of the separation of church and state. Specifically, he's trying to taint such separation by connecting it to Hitler.

Even if the notion of separation of church and state had come from Hitler, that doesn't make it a bad idea. The notion that such a connection with Hitler poisons it is just the Argumentum ad Nazium with a dash of the Genetic Fallacy. The Volkswagen beetle had a genuine connection to Hitler, but that doesn't mean it's a bad car.

As we approach the midterm election in November, we'll probably see more Hitler Cards played. It would be nice if there were a version of Godwin's Law to the effect that the candidate who compares his opponents to Nazis first loses the election.

Source: Eugene Volokh, "Next Time Your Liberal Friends Talk About the Separation of Church and State, Ask Them Why They’re Nazis", The Volokh Conspiracy, 9/19/2010

Subtitle: Why Experts* Keep Failing Us―And How to Know When Not to Trust Them

…[C]ompiling anecdotes and quoting experts about expertise doesn’t prove that experts usually mislead us. Actually, proving expert wrongness isn’t really the point of this book. I’ve found that most people don’t need much convincing that experts are usually wrong. How could we not suspect that to be the case? We constantly hear experts contradict one another and even themselves on a vast range of issues, whether they’re spouting off on diets, hurricane preparedness, the secrets to being a great manager, the stock market, cholesterol-lowering drugs, getting kids to sleep through the night, the inevitability of presidential candidates, the direction of home values, the key to strong marriages, vitamins, the benefits of alcohol or aspirin or fish, the existence of weapons of mass destruction, and so on.

For the latest book club, we'll be reading the new book, Wrong, at the rate of a chapter or two each month. This installment will be the "Introduction", which fortunately you can read online (see the Source, below). For the next installment, you'll probably have to get a copy of the book if you want to read along.

Freedman introduces his book by introducing us to John Ioannidis, a mathematician who applies math to medical matters. Ioannidis is relevant to the topic of the book because he has done studies purporting to show that most medical studies are wrong―more precisely, he claims that most such studies are contradicted by later studies.

Freedman at first treats this as a shocking result, but I think that most people who pay any attention to medical research notice that the latest research will often seem to be contradicted by later research. It's a common complaint that we often read that we should eat oat bran, or drink pomegranate juice, only to hear later not to bother. Freedman is aware of this as he mentions in passing that "much-heralded drugs get yanked off the market [and] we get conflicting advice about what to eat". So, Ioannidis' research seems to support what the rest of us have already gathered from experience. Of course, whether we base it on personal experience or on Ioannidis' research, this is a reason to be skeptical of claims based on what the "latest research shows". Freedman uses the following analogy to describe this research:

Ioannidis felt he was confronting a mystery that spoke to the very foundation of medical wisdom. How can the research community claim to know what it’s doing, and to be making significant progress, if it can’t bring out studies in its top journals that correctly prove anything, or lead to better patient care? It was as if he had set out to improve the battle effectiveness of a navy and immediately discovered that most of its boats didn’t float.

I think that what Ioannidis' research reveals is how misleading this analogy is. However, a lot of people do seem to think of scientific studies in this way, that is, they think of studies atomistically, with each a separate "boat" in the "navy" of science. That this is a wrong way to think of science is revealed by asking what role the replication of studies plays in this analogy. A vital part of scientific method is replication, and the results of a study can't be claimed to be well-established until they've been replicated by later studies. If the latest study is supposed to be the gospel truth, why would it need to be replicated? Of course, as Ioannidis' research shows, the results of many studies are not replicated, or only replicated in part. The fact that so many studies fail to be replicated only goes to show the important role replication plays. More importantly, what does this have to do with the claim that most experts are wrong?

Freedman proceeds to answer three objections to skepticism about expertise:

What is an "expert", according to Freedman? Near the end of the introduction, he explains that he means "mass" or "public" experts, that is, popular "experts" that the media go to for opinions. This means that Freedman's criticisms of experts, in his sense, may be as much or more criticisms of the media and their choices of who to consult. Also, in a footnote (p. 12) not included in the excerpt, he writes: "I'm also mostly ignoring engineers and designers, who tend to give us tangible items rather than advice".

I'm highly skeptical of the claim that most experts are wrong, since it's such a sweeping generalization, but I don't need much convincing that most "public" experts are wrong. After all, the media frequently treat celebrities as medical experts simply because they or one of their relatives contract a disease. So, as we read the rest of the book, we need to keep in mind that when Freedman says that "experts" are wrong, he really means the kind of "mass experts" you see on "Oprah". I'll buy that.

Next Installment:
Chapter 1: Some Expert Observations

The ad for the new George Clooney vehicle, The American, directed by Anton Corbijn, includes the following blurbs:

On 2 May 2008 tropical cyclone Nargis struck Burma with such force that even today nobody knows how many people were killed, although the ruling military junta reported exactly how many chickens died. … Official Burmese lying is stupendous. 1,250,194 chickens died in the cyclone, the junta declared. They also said that 76.28 per cent of Rangoon's telephone lines were soon restored, together with 98.5 per cent of the water supply.

Here's an excerpt from the "Introduction" explaining roughly what this new book is about:

…[P]roofiness: the art of using bogus mathematical arguments to prove something that you know in your heart is true―even when it's not. …Using a few powerful techniques, thousands of people are crafting mathematical falsehoods to get you to swallow untruths. Advertisers forge numbers to get you to buy their products. Politicians fiddle with data to try to get you to reelect them. Pundits and prophets use phony math to get you to believe predictions that never seem to pan out. Businessmen use bogus numerical arguments to steal your money. Pollsters, pretending to listen to what you have to say, use proofiness to tell you what they want you to believe.

Disappointingly (see the Resource, below), the book doesn't appear to have anything to do with mistakes in proofs, but with the misuse or misapplication of math. However, that's an interesting topic in its own right, and I look forward to reading it. Apparently, it will be released the 23rd of this month, and I'll probably post a review shortly thereafter.