Made with All Natural Ingredients!

I can honestly say that The Fallacy Files has no MSG. Never had it; never will! Also, it has no preservatives or artificial flavors, unlike some Frito-Lay chips.

Snack-maker Frito-Lay is introducing "natural" versions of its potato chips and other snacks. I saw bags of Lay's potato chips prominently displayed at the grocery store the other day bearing new "made with all natural ingredients" labels, which say that they have no MSG, preservatives, or artificial flavors. Frito-Lay is owned by Pepsico, the makers of Pepsi Cola, and longtime readers will remember Pepsi Natural, which also claims to be made from all natural ingredients, such as sugar instead of corn syrup. Why sugar is more natural than corn syrup remains a mystery.

In contrast, psychologist David Barash, who likes nature, recognizes that there is bad stuff in it:

Consider typhoid, cholera, polio, plague, and HIV: What can be more natural than viruses or bacteria, composed as they are of proteins, nucleic acids, carbohydrates, and the like? Do you object to vaccination? You'd probably object even more to smallpox. …I suspect that those well-intentioned people who admire "natural" raw milk have never experienced the ravages of Campylobacter, pathogenic E. coli, or bovine tuberculosis, each spread by the unpasteurized McCoy.

Now, they can wash down some Lay's potato chips with raw milk and find out! These thoughts lead Barash into deep philosophical waters:

In his A Treatise of Human Nature, in the 18th century, David Hume presented, and criticized, what has come to be known as the "is-ought problem"… Is there any way, he asked, that we can legitimately connect how the world "is"…with how it "ought" to be (including how we ought to behave)? Simply by raising the question, he so conclusively severed "is" from "ought" that the distinction―between the descriptive and the prescriptive, between facts and values―is called "Hume's Guillotine." His insight that it is fallacious to derive "ought" from "is" has become known as the "naturalistic fallacy," a term coined by the British philosopher G.E. Moore in his 1903 book, Principia Ethica.

True enough, but as I've pointed out before (see the Exposure section of the Appeal to Nature entry), this is not what Moore meant by "naturalistic fallacy". "Naturalistic fallacy" was an unfortunate choice of a name, since it sounds as if it ought to mean the appeal to nature. "Definist fallacy" has often been suggested as a better alternative, because Moore thought that "good" was a simple, indefinable concept. Thus, trying to define "good" in naturalistic terms would commit the definist "fallacy", but so would defining it in theological terms, for instance, defining "good" as "what God wills" would also commit the fallacy.

In any case, the "naturalistic" or "definist" fallacy is not a logical fallacy. For one thing, it's not a mistake in reasoning, but a supposed error in definition. For another thing, it's at best a mistake in ethics, rather than logic, and a controversial one at that.

At the same time that Barash is accepting an is-ought divide, Michael Shermer is trying to bridge it:

The "naturalistic fallacy," sometimes rendered as the "is-ought problem"―the way something "is" does not mean that is the way it "ought" to be―has for centuries been piously parroted from its leading proponents, philosophers David Hume and G. E. Moore, as if pronouncing it closes the door to further scientific inquiry. We should be skeptical of this divide. If morals and values should not be based on the way things are―reality―then on what should they be based?

It certainly is invalid to reason from the fact that something is the case to the claim that it ought to be the case; you can't turn around without tripping over a counter-example. However, Hume had more in mind: he thought it impossible to argue validly from any facts about the world―i.e., "is" statements―to an "ought" statement. This is not at all obvious, and is philosophically controversial. For that reason, I won't take a position here on whether there is such a "gap" between "is" and "ought" statements, though I agree with Shermer that skepticism is warranted.

Besides, I don't need to, because my objection to the appeal to nature is not based on this supposed gap, but on the vagueness and ambiguity of the concept of the natural. What is "natural" or "unnatural" is so unclear that it can't be the basis for any conclusion of consequence, whether about what snacks to eat or if its wrong to clone a human being.

My question is this: What do you call it when A makes a statement, and B says that A's statement contains logical fallacy C, only it really doesn't?

I call it "fallacy abuse"; Howard Kahane called it "False Charge of Fallacy". Dave's question refers to the following example that used to be on the "Stalking the Wild Fallacy" page:

The Lies Behind Gun Control

In order to understand the example, a little background knowledge is needed: "safe storage laws" legally require that guns be stored in such a way as to make it difficult for children to get ahold of them. The rationale for such laws is to curtail accidental deaths and injuries resulting from loaded guns in the hands of kids.

The example lacks explicit causal language linking safe storage laws and high crime rates. However, the last part of the example reads: "States that passed 'safe storage' laws have…higher rates of rape and aggravated assault against women." This claim contains a dangling comparative, namely, "higher". Higher than what? There are two possibilities that occur to me:

Why does the example address the issue of the crime rates in states with safe storage laws, and not the rates of firearms accidents involving children? As far as I know, no one who supports such laws suggests that they will lower the crime rate; rather, they are aimed at lowering the rate of accidents. As a consequence, if the example is really arguing that "the passage of safe storage laws failed to prevent high crime rates, or failed to lower crime rates that were already high", then it is attacking a straw man.

Rather than just being a red herring, I think the reason that crime rates are introduced is that there is a causal story of how safe storage laws could lead to more crime. Storing a gun in such a way that children cannot misuse it―for instance, by keeping it unloaded, storing it in a safe, or using a trigger lock―also makes it more difficult for the owner to use it in an emergency. Thus, the main objection to such laws is that they will make it hard for law-abiding gun owners to use their weapons to defend themselves, their families, or property from criminals.

It's plausible that safe storage laws might indeed have such a side effect, but plausibility is not enough to establish causation. Nor is the fact―if it is a fact―that the crime rate has risen in states that have adopted the laws, or is higher in states with such laws than in states without them. The fact that the example mentions the supposed "higher" crime rates leads me to believe that it is at least setting up a logical boobytrap for the reader, specifically, a Non Causa Pro Causa boobytrap. If that's not what's going on, then the example is either a straw man or a simple non sequitur.

I've removed the example from the wild fallacies page, even though I still think that the most plausible interpretation of it is as a post hoc argument. However, it's a much more complicated example than I originally realized, and thus needs more room for explanation than is appropriate for that page. It's also a lot more interesting than I first thought!

We know about optical illusions, and we’re familiar with the ways that our eyes can be misled. It would be nice if we could also be wary of cognitive illusions that affect our reasoning apparatus….―Ben Goldacre

Human causal detection abilities are oversensitive, and tend to produce a lot of false positives, that is, we often jump to causal conclusions on insufficient evidence. It's a lot harder to prove a cause and effect relationship than people seem to imagine.

In his latest "Bad Science" column, Ben Goldacre reports on new research into the formation of false causal beliefs and, perhaps more importantly, how such false beliefs can be minimized. Not surprisingly, when told about ill patients recovering after they received a drug, people infer that the drug cured the disease. Apparently, it never occurs to them that the person might have recovered without taking the drug. As the old joke goes, left to itself a cold will last seven days, but proper treatment will clear it up in a week.

Judging from Goldacre's description, neither group in the experiment received enough information to warrant drawing a causal conclusion. However, hearing about more cases of people recovering who did not receive the drug seems to lessen the tendency to impute curative powers to it. Now, if only people were able to draw the general conclusion that post hoc reasoning is fallacious. 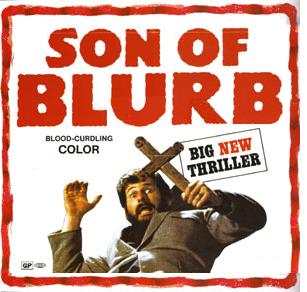 Blurb Watch: The Next Three Days

Here's a blurb from an ad for the new Russell Crowe movie, together with its context from the review:

Maybe you should watch just the last half hour.