Fact Check it Out 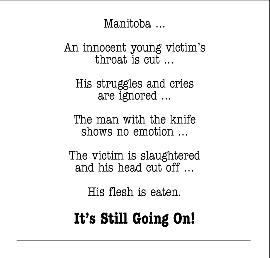 PETA is back to its old trick of drawing question-begging analogies between humans and other animals. In the past, they drew detailed parallels between the treatment of animals and both human slavery and the Holocaust. Now, the parallel is between a recent, horrendous murder that took place in Manitoba and the killing of animals for food. All of these analogies beg the question because, to have any moral force, nonhuman animals must be morally similar―if not morally equivalent―to human ones, which is something that most of the target audience for the ads would deny.

The new Los Angeles Times/Bloomberg (T/B) poll results are out. Recall that this was one of two outlier polls showing Obama with a double-digit lead over McCain about two months ago (if you don't recall, check the Resources below). The current poll shows Obama with a one percentage-point lead over McCain, which is of course within the margin of error (MoE). Bloomberg calls the race "deadlocked" in its headline, and the Times says that it's a "statistical tie", so I can't complain that they're ignoring the MoE in their reporting.

However, they are ignoring the consensus of current polls: Pollster's latest average shows Obama with a 1.5 percentage point lead. So, even though the T/B poll result is not itself statistically significant, it probably represents the current state of public opinion fairly accurately. Unfortunately, when news outlets report on polls that they sponsor they seldom compare the results with those of other current polls. This means that it's up to us individual poll watchers to do this for ourselves.

I bought a bottle of tea yesterday, and noticed as I was drinking it today that the label said that it was "naturally sweetened with sugar". This claim raises a couple of logical questions:

Update (8/18/2008): A secret source within the tea company sent the following transcript of a meeting between the husband and wife team assigned to market the new tea:

A: Honey, we've got this new, sweetened iced tea, so I'll need you to design a label.

B: What did you sweeten it with?

B: Darling, you sweetened it with naturally?

A: No, honey, we sweetened it with sugar, naturally.

A: No, dear. Look, I'll try asking you. What did we sweeten it with?

B: So you sweetened it with naturally, sugar.

A: No, honey, we sweetened it with sugar, naturally.

Acknowledgments: The "secret source" is Jay Levitt, but don't tell anyone.

Speaking of the bandwagon effect, as we were in the latest book club installment, Slate has a book review which discusses how alarmism about the environment can cause panic. There's also another fallacy at work:

Some crucial connective tissue is missing: the links that would prove, or at least strongly indicate, a cause-and-effect relationship between particular chemicals and specific illnesses. We read, for example, about a toddler named Jobori Montgomery who has asthma and about a teenager named Justin O'Neill who died of a rare brain cancer. Both lived near the oil refineries and petrochemical plants of Port Arthur, Texas―a relationship that is suggestive but hardly definitive. Causation in such cases is notoriously difficult to demonstrate, and the Shabecoffs don't really try; instead, they bridge the gap with fist-shaking rants against the evils of the chemical industry and vague, grandiose calls to "rethink our economic priorities" and "reinvent the American community."

…[S]ocial influences are often used strategically. In particular, advertisers are entirely aware of the power of social influences. Frequently they emphasize that "most people prefer" their own product, or that "growing numbers of people" are switching from another brand, which was yesterday's news, to their own, which represents the future. They try to nudge you by telling you what most people are now doing.

Candidates for public office, or political parties, do the same thing; they emphasize that "most people are turning to" their preferred candidates, hoping that the very statement can make itself true. Nothing is worse than a perception that voters are leaving a candidate in droves. Indeed, a perception of that kind helped to account for the Democratic nomination of John Kerry in 2004. When Democrats shifted from Howard Dean to John Kerry, it was not because each Democratic voter made an independent judgment on Kerry's behalf. It was in large part because of a widespread perception that other people were flocking to Kerry. (Pp. 64-65)

In this chapter, Thaler and Sunstein (T&S) discuss the way in which herd-like behavior can "nudge" people. In the guise of a logical fallacy, this is called the "bandwagon" effect, or sometimes the argumentum ad populum, though this latter name is also used for rhetorical rabble-rousing. Morris Engel's name for it is "mob appeal", which makes a nice contrast to "snob appeal". "Bandwagon" is also one of the seven propaganda techniques identified by the old Institute of Propaganda Analysis.

Though there is a long history of calling appeal to popularity a logical fallacy, it's really more of a bias or psychological tendency, as T&S treat it. Rather than outright arguing that because something is popular it must be true, people are biased in favor of ideas that are common in their social group. This means that they don't subject such familiar ideas to the kind of skeptical scrutiny that they give to unfamiliar ones.

T&S begin the chapter with the example of Jonestown, where more than nine hundred people committed suicide, which goes to show the power of the bandwagon effect. However, Jonestown was also a case of self-selection, since those who died there had already chosen to follow Jim Jones to live in Guyana. In other words, they were not a representative sample of people, but a group of those who were unusually compliant and suggestible. So, even though the bandwagon effect was probably at least partly responsible for what happened, Jonestown shouldn't be used as an example to exaggerate the power of the effect.

A happier example is the "Don't Mess with Texas!" campaign, which used commercials starring Willie Nelson, among others, to discourage littering. However, this sounds more like an appeal to celebrity than a mob appeal.

T&S's use of the Jonestown example again raises moral questions that they have yet to address: if the bandwagon effect is as powerful a force as the Jonestown example suggests, do we want government making free use of it, even for such trivial purposes as discouraging littering? Rather than exploiting people's sheeplike behavior in order to herd them better, perhaps we ought to teach people how to resist being stampeded. So far, T&S only seem concerned that biases be used to "nudge" people in the right direction, and that the power to do so be in the hands of the right people, as opposed to someone such as Jim Jones. But how can we be sure of keeping the Jim Joneses of the world from gaining the power to "nudge"? Wouldn't it be better if people were less "nudgeable", just in case?

Studying examples such as Jonestown can help us see that following the crowd can lead to very bad consequences, and that individuals ought to stop, think, and ask questions about where everyone is going before joining the rush. "Thou shalt not follow a multitude to do evil."

Next Installment:
Chapter 4: When Do We Need a Nudge?

Based on the following five facts, can you determine which countries win medals in a certain single Olympic event, and what medals they win? Keep in mind that there are exactly three medals given: one gold, one silver, and one bronze. Also, no country can win more than one of these medals.

Translated from doublespeak into English, this reads: "Mexican prostitutes want place at AIDS conference". William Lutz lists "sex industry worker" in Doublespeak Defined, with a citation to a newspaper from 1988. The word "industry" seems to have dropped out of the phrase in the decade since Lutz's book, as a web search of news sites returns many occurrences of the phrase "sex worker", but only one of the full phrase. "Sex trade worker" returns an intermediate number of cases, all of them from Canadian news sources, oddly enough.

The term "sex worker" is apparently intended to have a broader meaning than "prostitute", embracing strippers, performers in pornography, etc., but the "sex workers" cited in the Reuters article are all prostitutes. So, a more general and, therefore, less precise term is used in the headline, which is one form of doublespeak.

However, even applied more broadly than just prostitutes, "sex worker" is a euphemism. The word "worker" obviously has positive associations, and it conceals the fact that many "sex workers" are also "crime workers", that is, criminals. The use of the term "industry" in "sex industry" also has positive, law-abiding associations, whereas at least some of the "sex industry" is controlled by the "crime industry".

Along these lines, here are some suggestions for future doublespeak:

Blurb Watch: The X Files: I Want to Believe

Second only to the exclamation point, the ellipsis is the most useful punctuation mark to the writer of movie ads: those three little dots can conceal inconvenient context. Case in point, consider the following blurb from an ad for the new X Files movie:

Corliss' point in this paragraph is that the show's fans will enjoy the movie, but those who are not "X-philes" may not. Replacing the words "for the show's fans" with an ellipsis changes Corliss' warning to non-fans into a recommendation for everyone. Beware the three dots!

Explanation: Given clues 1 & 3, there are three possibilities:

There are only three possibilities because it's impossible for Denmark and Brazil to both win the silver.

Suppose that the second possibility is true: If England wins the bronze then Denmark can't win a medal (clue 2), and if Denmark wins no medal, then neither does China (clue 4). So, that leaves Argentina as the gold medal winner. However, Argentina can win the gold only if China wins a medal, which we've already ruled out. So, 2 must be wrong.

Therefore, only the third possibility is left. Since Argentina wins the gold medal, China must win a medal (clue 5), which must be the bronze medal, since that's the only remaining one. This distribution of medals is the only one consistent with all five clues, so it is the correct solution.